Over the length of the project, there will be some impacts to abutters in terms of noise, traffic, parking, and other potential minor impacts. Project contractors and City staff are committed to minimizing and mitigating those impacts as much as possible. However, as with any construction project of this magnitude, some disruption is inevitable. We strongly encourage you to stay involved and informed by signing up for our bi-weekly (one every two weeks) email updates. You can do so by emailing construction@somervillema.gov at any time and noting that you’d like to sign up for SHS updates. Updates will also be posted to this page, and you can email us anytime with questions, comments, or concerns at shsfuture@somervillema.gov. In general, the impacts to abutters are outlined below and will be updated if and when we anticipate additional disruptions, or if conditions change. Please check back often for important updates.
Central Hill Memorial & Art Removals
Latest Update (12/9/2019)
Please join Mayor Curtatone and Somerville Public Schools Superintendent Mary Skipper for a second and final “topping off” ceremony at Somerville High School on Thursday, December 19.

This celebration marks a major milestone in the construction of the new high school, when the highest steel beam of the new building’s eastern wing will be set into place.

The ceremony will be held on the SHS campus on Highland Ave. next to the Central Library. Attendees can arrive as early as 2:30 p.m. to sign the beam; the ceremony will begin at 3 p.m., and light refreshments will follow in the high school cafeteria. Guests are encouraged to dress warmly and wear boots, sneakers, or other sturdy footwear.
Update (11/15/2019)
Update (10/25/2019)
Update (9/25/2019)
Weather permitting, on Friday, September 27, crews will start work behind the Somerville High School campus as early as 6 a.m. to place concrete floor slabs for the lower level of the new school’s western wing.

Students are on vacation the week of December 24, but workers may be onsite to remove some of the intact asbestos that had been discovered during excavation. All abatement is in accordance with plans approved by the Department of Environmental Protection (DEP). Asbestos that is properly managed in place poses no health risk.

Beginning on or around January 2, please expect construction activity on the Central Hill concourse between the SHS field house and the Central Library. Crews will be working on drainage in the area and removing the monuments from the site. Both playgrounds on Central Hill will be closed for about four to five weeks as a safety precaution.
Update (12/7/2018)
Suffolk will continue excavating soil behind the school, they'll begin coring holes for micropiles near the main building, and they plan to install micropiles near the high school library building during the week of December 10.

Abatement work continues to remove some of the intact asbestos that had been discovered on the construction site during excavation, so you may see contained work areas set up and personnel in protective gear onsite. As a reminder, asbestos that is properly managed in place poses no health risk to students, staff, or the general public.

If you're interested in parking on Central Hill parking policies, please join City staff on Wednesday, December 12, at 6 p.m. at the Central Library, 79 Highland Ave. This is the fourth in a series of public quarterly meetings to discuss parking changes, new data collection, and strategies for impact mitigation. Click here to learn more.
Update (11/30/2018)
Work is ongoing to remove some of the intact asbestos that had been discovered on the construction site during excavation. All abatement is in accordance with plans approved by the Department of Environmental Protection (DEP). Asbestos that is properly managed in place poses no health risk to students, staff, or the general public.

As abatement continues, you may see contained work areas set up and personnel in protective gear onsite.

The schedule for removing monuments on Central Hill has been slightly delayed. Playgrounds in the area are expected to be open for use throughout the week of December 3.

Suffolk will continue excavating soil behind the school, and they'll begin coring holes and installing micropiles near the D building (the high school library).
Update (11/14/2018)
Please expect restricted access to the Central Hill playgrounds and the surrounding areas in front of the Central Hill library during the weeks of November 19 and November 26.

During that time, the Civil War Memorial, the Vietnam War Memorial, and the Women of the Union Square Post Plaque Memorial will be removed, restored, and stored for the duration of construction. These will ultimately be reinstalled at locations to be determined as part of the Central Hill Campus Plan.
Update (11/2/2018)
In October, we notified you of the discovery of intact asbestos-containing materials (ACM) in the insulation of a pipe in an outside section of the SHS construction project. As we noted, the standard process to secure that area and ensure the safe removal of the materials was immediately put into place. The removal process for those materials has been completed.

We want to make you aware of subsequent suspect / confirmed ACM findings during the excavation process. Black footing damp proofing on the no-longer-used exterior gym stairs; insulation found on an old, unused, and unconnected pipe located underground; and insulation/debris inside an old, unused utility tunnel were confirmed to have ACM. Again, the areas were immediately secured as required by the Department of Environmental Protection (DEP). Work plans for these areas are being or have been developed, and are being or have been submitted to the DEP for approval to safely remove these affected materials. Excavation work around these areas has been temporarily halted until the plans are approved by the DEP and the affected materials are safely removed from the construction site. SHS parents/guardians and staff have already been notified.

As noted in our earlier communication, asbestos only presents a health risk when fibers become airborne and are inhaled. Like the previous finding, the latest ACM findings are intact and immediately contained, posing no risk to students, staff, or the general public. We want to reassure you that all abatement measures are being taken to safely remove the material in accordance with Federal and State regulations. You may again notice personnel in protective suits and wearing respirators while the abatement work is occurring, a normal practice during the removal process. All removal work is monitored, air quality is tested throughout the removal process, and final assessments are performed by a licensed project monitor to confirm that all ACM has been properly removed. Again, we remind you that these types of findings are very common on large construction projects involving older buildings.

We will continue to keep you informed as work on this project progresses, and are committed to ensuring that all appropriate steps are taken to safely and immediately address any unforeseen issues. For further information, please contact Leo DeSimone at ldesimone@k12.somerville.ma.us or (617) 625-6600, ext. 6136.
Update (10/25/2018)
During the week of October 29, Suffolk will continue excavating soil behind the school and working on the foundation for the emergency generator.

During the week of November 5, the Memorial Cannons will be removed from Central Hill and stored offsite. Pedestrians should expect restricted access in that area and note posted detours.

A few weeks thereafter, removal of the other monuments will begin. These include the Korean War Memorial, the Vietnam War Memorial, the Women of the Union Square Post Plaque Memorial, and the Civil War Memorial. Click here for an overview of the monuments, memorials, and art pieces on Central Hill that will be temporarily removed and stored for the duration of construction.
Update (10/15/2018)
We want to make you aware that a small amount of intact asbestos containing materials (ACM) were found in the insulation of a pipe in an outside section of the SHS construction project, between the vocational and academic areas of the 1986 wing. The area was immediately secured with red tape and poly tarps, as required by the Department of Environmental Protection (DEP). A work plan was approved by DEP to safely remove the affected materials. The removal process is currently under way. SHS staff and parents/guardians have already been notified.

Asbestos only presents a health risk when fibers become airborne and are inhaled. The ACM found at the site was intact and was immediately contained, thus posing no risk to students or staff. All abatement measures are being taken to safely remove the material in accordance with Federal and State regulations by trained and protected personnel in a manner that is protective of workers and occupants of the property. You may notice personnel in protective suits and wearing respirators while this work is occurring. This is part of the normal practice of removal. These types of discoveries often happen on large construction projects on older buildings, and we assure you that all removal work is monitored and final assessments are performed by a licensed project monitor to confirm that all ACM has been properly removed. 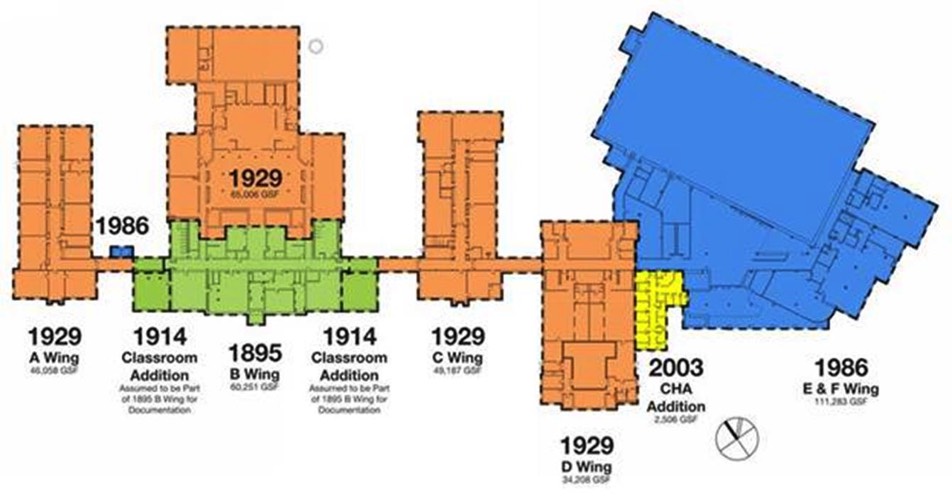 As of September 17, demolition of the C wing and the rears of the D and E wings has been completed.

Suffolk is also putting the finishing cosmetic touches on a new stairwell behind the gym (E wing), which leads down to Medford St.

During the week of September 24, behind the campus, crews will begin excavating soil and trucking it offsite. They’ll be clearing that area down to foundation level for the new building.

Noise
In general, contractors will not conduct work which requires significant noise during times when school is in session Through most of Spring 2018, there should not be much noise impact as students will be in school through June, and major demolition work will not begin while school is in session. Dust control measures will be utilized during any and all work where dust could spread beyond the immediate project area. Abutters will be notified in advance of any demolition work.

The High School Project consists of three phases of demolition:

Parking
Parking on the City Hall/SHS concourse, and other parking lots currently situated adjacent to SHS will gradually be eliminated as the project progresses. In January 2018, parking spots abutting the green space on the concourse were eliminated to make room for modular classrooms that will be utilized beginning on April 23, 2018.

Over the week of April 15, 2018, parking on the entire City Hall/SHS concourse will temporarily be closed as contractors create a new parking and driving configuration. That work will be complete and the concourse reopened on April 23, 2018. During the week of construction, City Hall staff will utilize SHS parking lots as school will not be in session. Therefore, we anticipate a net gain in parking for the neighborhood during the week of April 15, 2018.

The next alteration of parking will be the closure of the upper and lower school lots on the east (library) end of the site. This closure will occur at the conclusion of the 2018-2019 academic year, currently anticipated as June 19, 2019.

On the exterior of the site the contractor is required to employ dust control measures, often accomplished by watering down work areas on a regular basis, and particularly prior to earthwork or demolition activities. Construction equipment utilized onsite is required to have full exhaust systems and exhaust scrubbers where applicable.